Chicago, IL—June 2018…Jason Mitchell (D.j. Kidd) has entertained in the Chicago region for a long time but his current gig as a DJ and sound company is really Act II. “I’ve been a DJ for 20 years,” he relates. “I was prominent in the scene, played a lot of clubs in Chicago and several throughout the U.S. We had events for 5,000 people, with electronic music and full walls of speakers. Then I got married and left the scene, and when I came back about seven years ago and started playing parties, there were no speaker systems in any of the clubs. It was embarrassing. I started buying Mackie speakers for personal use so I could DJ in my living room and have some friends come over. I was buying quality speakers, and my friends started contacting me to rent my stuff. I saw an opportunity to get paid and have fun at the same time, so I started buying more.”

Mitchell’s initial foray into live-sound speakers began with a pair of Mackie Thump Series powered loudspeakers. “I loved the Thumps,” he recalls. “They were bass-y, and they projected sound and filled the room. They sounded great but they actually gave me more bass than I wanted, relative to the highs. So I did a lot of listening to different brands of loudspeakers; I went over to the showroom at 123dj here in Chicago and listened to every speaker they had. And I was extremely impressed by the clarity and precision of the Mackie SRM series.”

Initially, Mitchell purchased two Mackie SRM750 loudspeakers, which feature two 15-inch low-frequency drivers and a 1.4-inch high-frequency driver, along two SRM2850 subwoofers, each with two 18-inch woofers. “I bought that system and started working with it every weekend because of the sound quality and the way the SRMs filled the room. At that point, I was playing venues for 100 to 150 people and filling them really well. People like a lot of bass but when it comes to techno and tech house, they want quality over quantity, and the SRMs deliver the quality.” 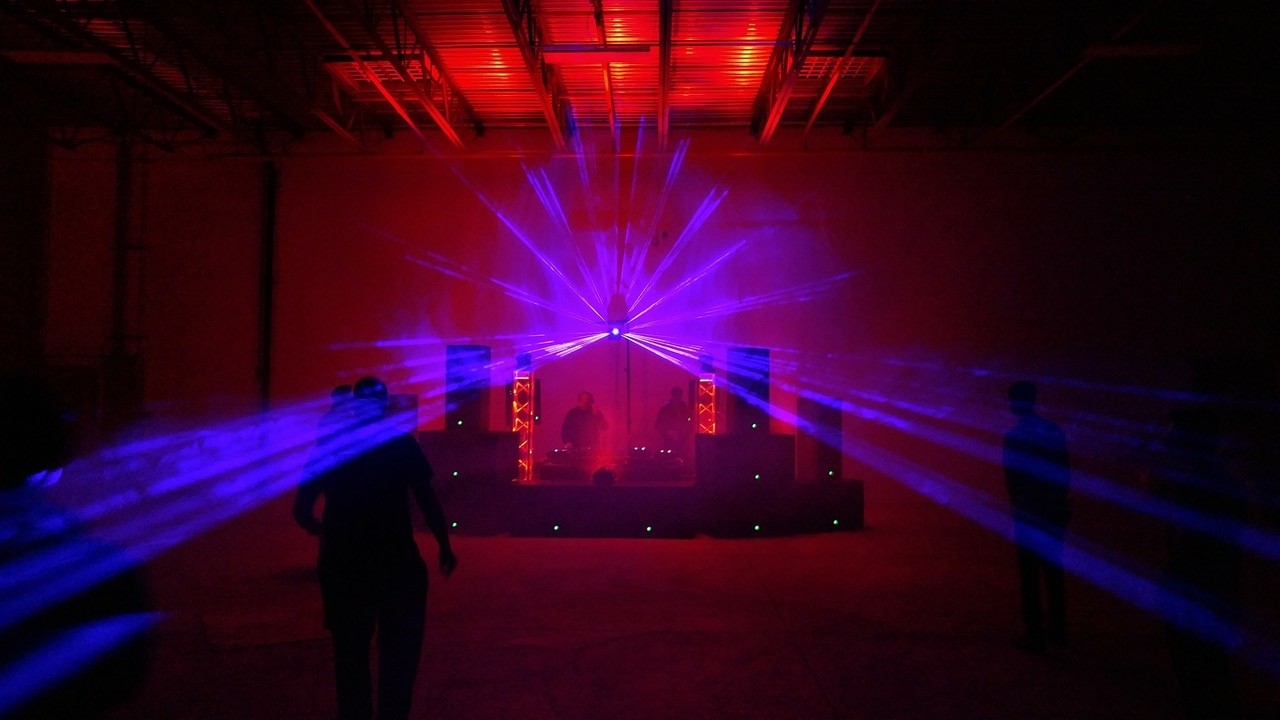 Working with a friend, Mitchell’s shows started to grow, and he invested in more Mackie SRMs. “I bought four more SRM2850 subs and two more SRM750 tops,” he recounts. “Sometimes I combined them into a big system, sometimes I split them up. I found the SRM750 double-15s are very, very powerful and project a lot of sound, and they can overwhelm one subwoofer, so I ordered two more SRM2850s. For each SRM750, I now use two SRM2850s, so we’re filling 500- to 700-person rooms with four SRM750 tops and eight SRM2850 bottoms. I daisy-chain the subwoofers, and there’s no real loss in signal, which is wonderful. And the sound quality is awesome; I’ll put my system up against any of the competition.”

To complete his system, Mitchell added two Mackie SRM650s, each with a 15-inch woofer and a 1.4-inch high-frequency driver, and two SRM1850 single-15-inch subwoofers. These serve as his booth system. “It’s a fully professional booth,” he attests. “A lot of the headliners that we bring in won’t even play if you don’t have two single-18 subs and two monitors for the booth, and we deliver quality.”

Mackie SRM loudspeakers make Mitchell’s job easier in several ways. “The speakers pretty much do all the work themselves,” he observes. “You have four speaker modes, so the speaker tunes itself for your application. I always use the DJ mode, except for the monitors, and it works perfectly. If someone’s red-lining on the mixer, the speaker has built-in protection so you won’t blow the speaker. I also use the Feedback Destroyer, which works very well. To reset the Feedback Destroyer, you just push a button to clear it, and everything’s good.”

Thanks to his experiences with Thump and SRM speakers, Mitchell is a confirmed Mackie user. “I bought a ProFX12v2 12-channel analog mixing board for large concerts and for mixing a full band,” he reports. “I chose the ProFX12v2 because Mackie sold me on the brand. I like their equipment, and it all works together very well. The ProFX12v2 has four outputs, so I can distribute power equally among the four speaker chains. I record the show audio using the mixer’s built-in recording interface and run my lights from the same laptop. I also incorporate video into my concert setup so it’s pretty darned cool.”

Nowadays, Mitchell provides systems for rooftop parties, boat and yacht parties, small warehouse events, outdoor festivals, and lots of underground events. You’ll sometimes find him setting up his Mackie SRM system for rooftop events at the Estate Ultra Bar, a huge, upscale River West bar and yacht club. “Everybody loves the Mackie system,” he testifies. “And I have a lot of cool lights, which really enhance the system. The speakers sell themselves but I accent them with up lights, a laser, and so on. It’s all part of the show.”