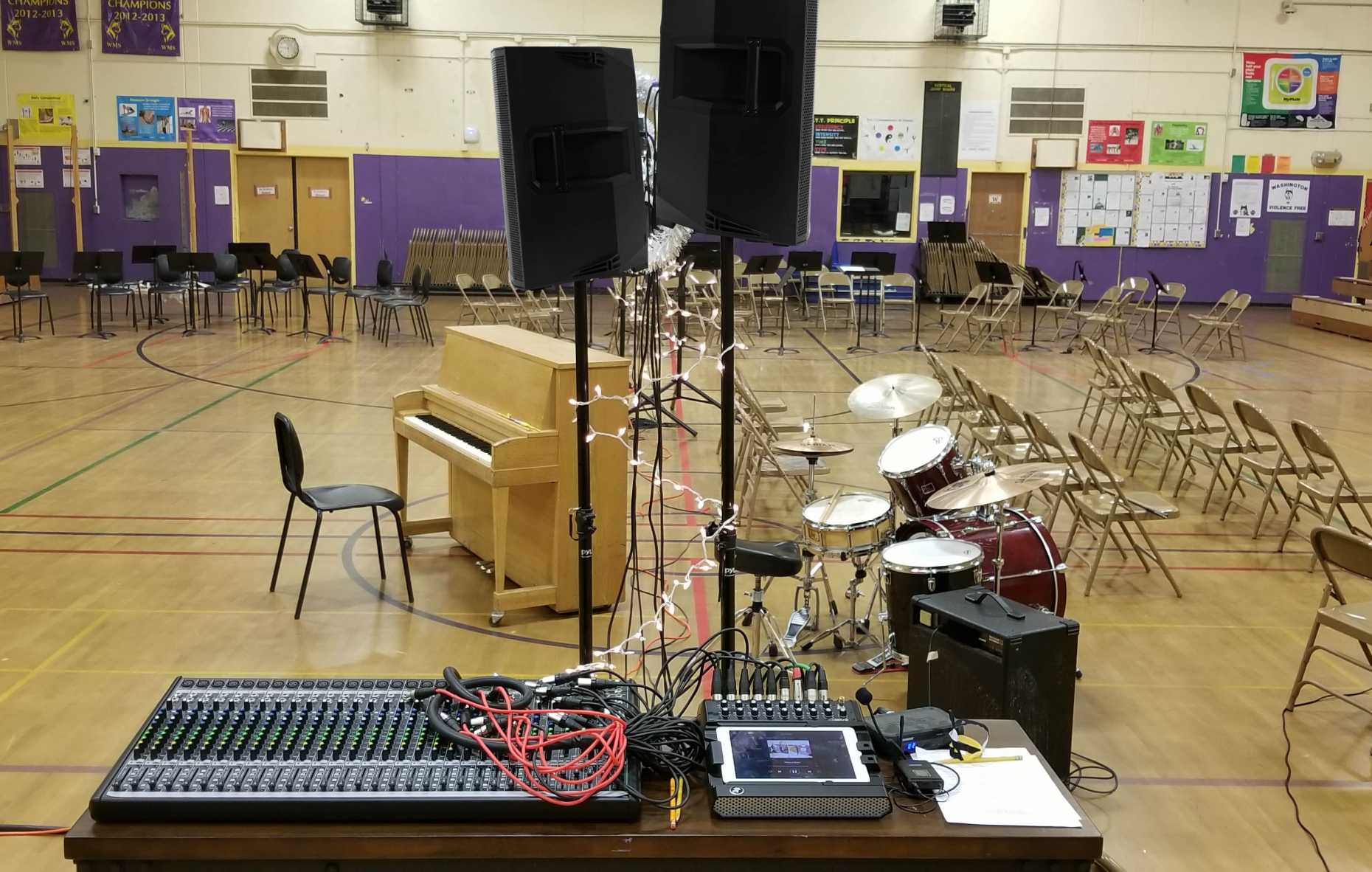 Seattle, WA - February 2019... Nestled between Seattle's Atlantic and Judkins Park neighborhoods, Washington Middle School is renowned for its music programs. Over half of the student population participates in one or more of the school's 13 ensembles, which run the gamut from choirs to string quartets to jazz bands. To ensure that the sound quality at rehearsals, public performances, and competitions is on par with the dedication of the students and teachers, band director Jared Sessink recently added four Mackie Thump Boosted™ 12BST powered loudspeakers, a Mackie DL1608 16-channel digital mixer, and a Mackie ProFX30v2 30-channel analog mixer to the music department's toolbox.

"When I took this job, one of my priorities was to start utilizing technology in more active ways," Sessink recalls. "To that end, I wanted to get some equipment with simple interfaces that would make it a lot easier for us to produce high-quality live sound at our rehearsals and concerts - especially in the school gymnasium, which is a very boomy room. We have a parent at the school who is very familiar with Mackie because he owns a recording studio here in Seattle, and he introduced me to the Mackie DL1608 digital mixer."

Instead of a physical mixing surface, the DL1608 relies on wireless control using Mackie's Master Fader control app for iOS. (Android, macOS, and Windows versions are expected later this year.) "I very much appreciate being able to mix the band from an iPad that I keep right on my podium," relates Sessink. "We do things where I'm balancing miked horns and other acoustic instruments with students playing electronic keyboards. To be able to mix those right from the podium, as opposed to hiring a separate technician to run a soundboard, is incredibly convenient."

The DL1608's precise four-band parametric EQ makes getting clean, clear sound a breeze in the acoustically cavernous gym. "Concerts in the gym normally sound very muddy because you have hard, reflective surfaces everywhere," Sessink observes. "Using the DL1608's parametric EQ, I was able to notch out the most troublesome lows and low-mids during rehearsals in the band room. When we took it into the gym for the show, things sounded very clear, with minimal need for further adjustment."

For performances that call for a larger mixing console and someone to staff it, Sessink chose the largest member of the current Mackie ProFX family, the ProFX30v2. "We use the ProFX30v2 primarily for our Vocal Jazz ensemble, where we have a choir and featured singers in addition to a full orchestra," he comments. "We had a rather outdated mixer before, and we found that at competitions, a lot of vocal jazz ensembles had rehearsed their music with mics, whereas we didn't have adequate equipment for that, so we only used mics at the competition. We purchased the Mackie gear so we could practice the way we perform. The Mackie Vita™ preamps, EQs, and built-in effects sound great, and the controls are so simple and straightforward that we can get set up quickly and rehearse in conditions similar to those we'll have in performance."

That ease of use is one of Mackie's key overall virtues for Sessink: "As I'm primarily a band director, my skill set as an audio engineer is pretty limited," he admits. "So it's very helpful that on both the DL1608 and the ProFX, things sound pretty good before you even begin to make tweaks. The DL1608 has input presets for different types of instruments; there's one for bright brass that I love on trumpets and trombones."

On the business end of the signal chain is a stable of Thump Boosted 12BST powered speakers, each with a 12-inch woofer and a 1.4-inch titanium dome tweeter, driven by 1,300 watts of Class-D power. "I really like that the Thump Boosted loudspeakers have a three-channel mixer and Bluetooth wireless input," enthuses Sessink. "I could use the Master Fader app to get prerecorded music into the system for intermissions and before the show but I prefer to stream music right from my phone to the speakers. Since one speaker can act as the master input for all the others, it's simpler that way."

Audio quality and bass response are also major plusses for Sessink. "There are so many things you can adjust onboard, like voicing modes to adapt the speakers to the room they're in," he details. "They're so versatile. It doesn't hurt that they're the lightest weight speakers we've ever had. And they can really put out the bass! We're an inner-city public school, so sometimes we bring in pop, R&B, and hip-hop tunes that the kids want to play. Having enough bass to shake the walls really gets the students engaged."

For very large shows, all of Washington Middle School's Mackie gear gets pulled together. "We had a concert at the end of October 2018," Sessink recalls, "where I had critical elements I wanted to keep an ear on - keyboards, direct outs from instrument amps, featured performers - coming through the DL1608, controlled with the iPad on the podium. I brought that submix into the ProFX30v2, which also handled all our vocals and choir. Every student was miked. This fed four Thump Boosted 12BST speakers, one pointing in each direction in the gym. People are still talking about how good it sounded."

Last but not least, Sessink flags Mackie's well-known bang for buck as a perfect match for the budgetary challenges of a public school's music program. "Last school year, I'd put in a proposal for $10,000 for sound equipment," he reveals. "With the deals we got, we were able to do it all with Mackie for something like $6,000. Schools have spent so much money renting P.A. systems and hiring engineers for concerts. With technology this affordable and this easy for teachers to learn, we no longer have to."