Denver, CO-October 2018...Restless spirits lurk in hidden places; vicious souls invite unsuspecting victims into a House of Shadows; clowns with bags of wicked tricks await as you ride a hay wagon through haunted woods; ghoulish shrieks and evil laughter greet you in a corn maze. It's all the work of the wickedly talented people at Thirteenth Floor Entertainment Group, the world's largest Halloween-themed entertainment company. With more than 15 haunted houses, touring events, and year-round attractions, they're a real scream. And at every turn, you experience those screams-along with wails, shrieks, monstrous roars, buzzing chainsaws, and more-loud and clear on Mackie Thump series and SRM450 loudspeakers.

"We started our haunted houses in 2002," recalls Thirteenth Floor Entertainment Group partner Warren Conard. "I had some of the original Mackie SRM450s because I did some DJ work, and we used those at a haunted house in a mall. The mall wouldn't allow a chainsaw, and in the haunted house world, customers expect a chainsaw. So I played a recorded chainsaw sound through the SRM450s, and it sounded so realistic that we fooled everyone that whole year." 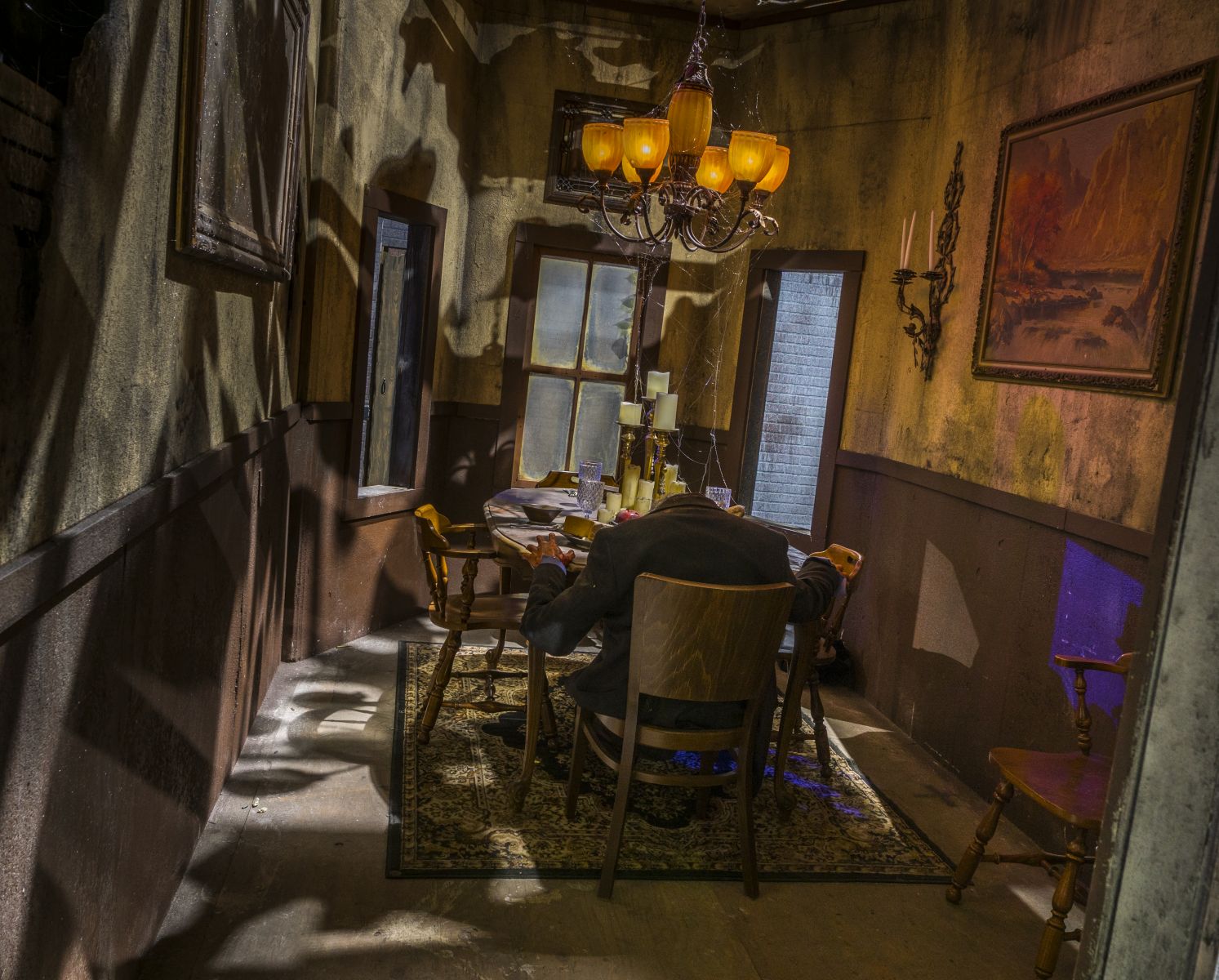 After an initial phase, Conard and partner Chris Stafford teamed up with a like-minded group that ran a haunted house in Austin, Texas. "They were a similar age, similarly business-minded, and we were both looking to do something in San Antonio, so we did it together," he recounts. "Then we acquired two haunted houses in Phoenix and two in Chicago, and now we have attractions in Nashville; Columbus, Ohio; Jacksonville, Florida; and other locations. Most recently we acquired the L.A. Haunted Hayride, an outdoor seasonal event at Griffith Park that has been around for ten years, and we're using the Mackie SRM450v3 loudspeakers there."

Although Thirteenth Floor Entertainment Group uses SRM450s for several outdoor events, the Mackie Thump series is their choice for most indoor haunted houses. "We use a ton of Mackie Thumps," confirms Conard. "We started using the first generation of Thumps because they had so much low end and power, and they were less expensive than the SRM450s. They hit you hard, which was what we needed. Now we have hundreds of Mackie speakers around the country."

Because they use so many speakers, Conard tried other brands too. "But they didn't work for us," he avers. "They might have a lot of features but they didn't have the quality Mackie has. So we got the second generation of Mackie Thumps, and we stayed with Thumps. We've had dealers try to sell us speakers that cost $200 more, but the new generation of Thumps are as good or better. And when you buy 40 or 50 loudspeakers at a time, price matters." 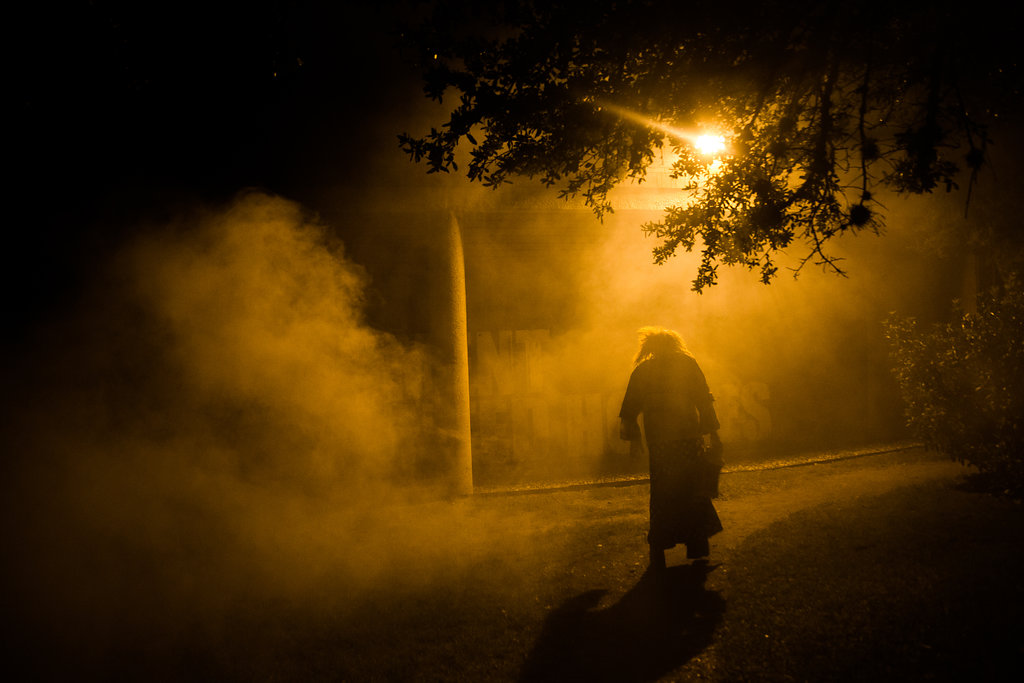 For most indoor applications, Conard favors the Mackie Thump15A without a subwoofer. "We use subwoofers occasionally, like where we have big monster roars, but we don't usually need sound below 80 Hz," he observes.

In the haunted house environment, media players are typically hardwired to the loudspeakers, and loudspeaker levels are "set and forget." The Thump15A has proven a perfect choice, Conard reports. "Also, the Thumps are lightweight, so we can put them in a lot of places we might not consider with a heavier speaker."

For outdoor locations, such as the L.A. Haunted Hayride, the new third-generation Mackie SRM450 has become the loudspeaker of choice. "The SRM450 is portable, stands up well to outdoor conditions, and sounds great, despite wind and dust," Conard observes. "We bought 50 of them for the L.A. Haunted Hayride. We can hide them in the cornfield or pretty much anywhere, and they'll perform the way we need them to."

Having used Mackie SRM450s all the way back to his first haunted houses, Conard is a confirmed fan. "I want to do more with the SRM series," he asserts. "In addition to the SRM's other advantages, the RCA unbalanced inputs make connection to media players easy. In addition to the SRM450s, I want to bring in an SRM350 and try it for certain types of scares. We have actor-assisted scares in which we put a character behind an opening in a wall, where they have a good hiding spot. When they jump out, that activates an audio track to supplement their scare. I've tried different solutions but I want to try the SRM350 because it's compact, with a 10-inch woofer, and we don't need the low end of a Thump or SRM450 for those scares."

Although he terrifies people for a living, Conard has no fear when it comes to his audio systems. "Audio is not given the attention it deserves in Halloween attractions and haunted houses," he insists. "Some haunted houses use small guitar amplifiers and the like, and they don't have anywhere near the impact and realism we get with Mackie Thumps and SRM450s. And if the sound system fails in a haunted house, you're in big trouble. I don't worry about that with Mackie loudspeakers.