Hägersten, Sweden-April 2017... Heavy metal fans need no introduction to HammerFall. The Swedish powerhouse has been delivering melodic metal since the mid-1990s and shows no sign of slowing down. Guitarist, backup singer, and programmer Pontus Norgren came onboard in 2008 and added considerable technical experience, having served as front-of-house engineer for Thin Lizzy, Europe, and Yngwie Malmsteen.

So when HammerFall wanted a new, state-of-the-art in-ear stage monitoring system, Norgren was positioned to make it happen. After considerable research, he selected the Mackie DL32R rack-mount digital mixer to serve as the heart of the system. "The DL32R was right for us for several reasons," Norgren asserts. "Our monitor system uses the KLANG:fabrik 3D personal monitor mixing system, which supports Dante. I went through more or less all the rack mixers with Dante to find the right one, and the DL32R had everything we needed."

A colleague in Sweden with 10 Mackie DL32R's insisted that Norgren check it out. "He said, 'just try it because it sounds great,'" Norgren relates. "He is using the DL32R for front-of-house and monitors and claimed it was rock solid and never failed. So I went to his shop, and we went through the features. When I saw how easy it was to patch stuff and use the processing, I realized the DL32R was it." 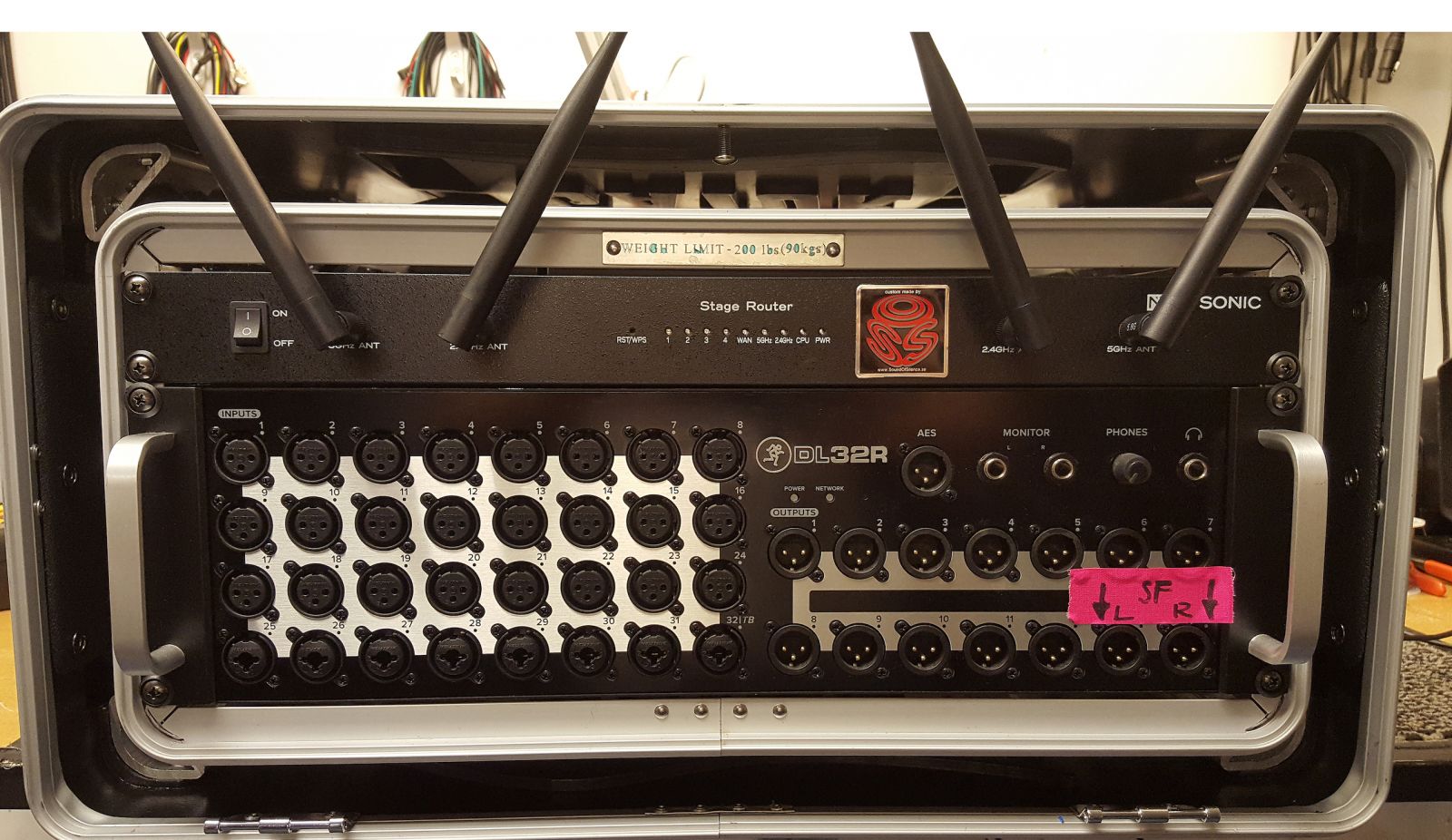 HammerFall's monitor rig is deceptively compact, fitting in one 4U, shock-mount rack built by Sound of Silence, a Stockholm-based firm. The entire system, with cabling, weighs 57 lb. (26 kg) and is flyable. "We have to fly everywhere, and now we can always bring the monitor setup and have the sound we want," observes Norgren. "We load the presets, we connect the monitor system, and it sounds the same each time."

Inside the rack, the band's drum mics, vocal mics, and guitar and bass DI outputs connect to a pair of 8-channel splitters. One split feeds the FOH console; the other goes to a Mackie DL32R with optional 32x32 DL Dante Expansion Card. The DL32R sends its outputs via Dante to the KLANG:fabrik, which feeds 3D-processed output to the in-ear transmitters. 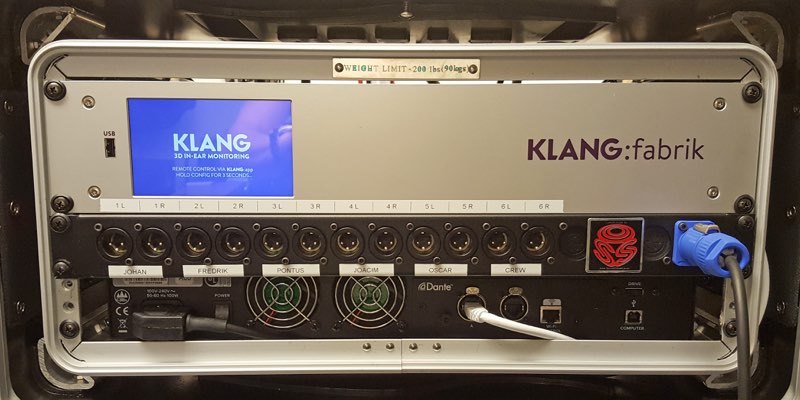 "Master Fader makes it easy for the band to mix their monitors," Norgren confirms. "Joacim Cans, our singer, knows how to change the reverb and delay and tweak his compressor for different shows. He just does it; there are no questions. Oscar [Dronjak] didn't like his guitar sound, so I opened up the EQ and told him to fool around a bit. I had saved his preset, so it didn't matter if he messed up. Now he knows how to do it, and his guitar monitor sounds good. I told him, 'You made it feel good, not me.' He was so happy; he said, 'This is great!' Now the band has started to understand the signal flow and can help themselves. And the built-in RTA/Spectrograph is a great tool." 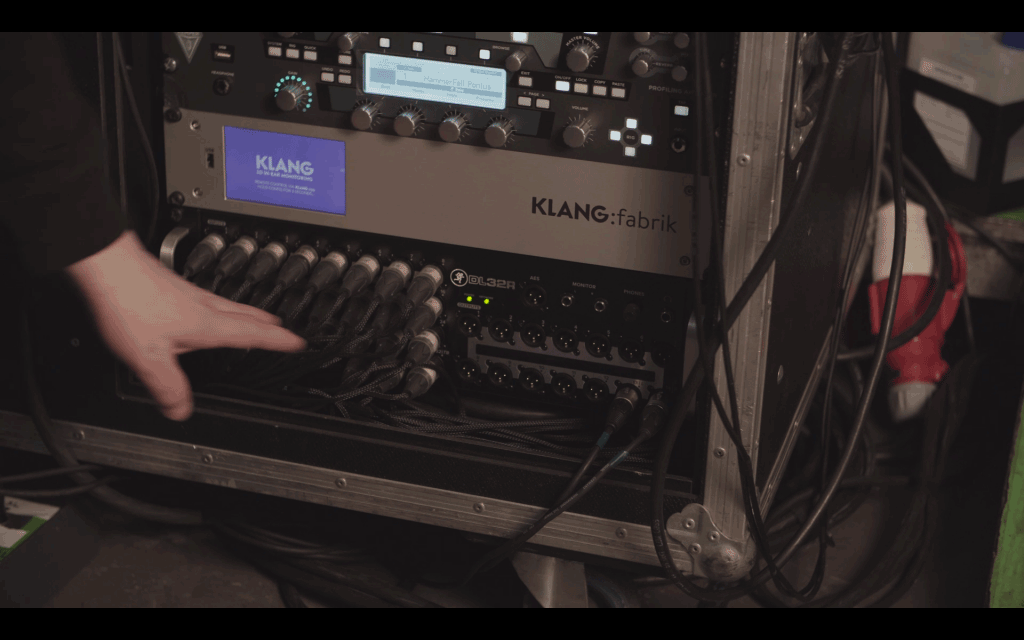 Master Fader has made life easier for HammerFall's techs, too. "On the recent tour, the main guitar tech was on stage left with the main iPad," recalls Norgren. "On the other side, the other guitar tech and drum tech had his iPad. During soundcheck, we adjust our monitor mixes, and if something happens during the show, either tech can fix it."

Another strength of the DL32R, per Norgren, is the complement of inputs and outputs. "We connect the KLANG and DL32R with Dante, so we still have all the DL32R outputs except the L/R mains, which I use for sidefills," he expounds. "That gives us more than enough for wedges when we play huge stages at bigger festivals and need extra power. If we have a guest artist, we can give him a wedge or stereo in-ear, and he gets a great stereo mix from the DL32R. We also have the inputs we need, with one channel left over."

The DL32R's audio quality and reliability were clinchers for Norgren. "When I did my tests, the DL32R sounded the best when it came to effects, compressors, and gates," he confides. "And it really has been rock solid. We just turn it on, and it works. I'm blown away by how well it works. It's amazing!"

Read more about how Hammerfall uses their KLANG:fabrik 3D