Long before digital recording, before spring reverb, before even analog tape, there was equalization. EQ is one of the old tools in an audio engineer’s arsenal, and one of the most powerful. Used judiciously, EQ can add clarity and definition to a crowded soundscape. Used with precision, it can remove offending sounds we hadn’t necessarily intended to capture. As a strategic tool, a bit of EQ can make all the difference in making peace between dueling guitars, scoop the mud from the heaviest drums, or make a mundane vocal stand up and shine.

But all too often, EQ is misused and misunderstood, typically in a vain attempt to fix a poor recording. Rule Number One in recording still applies: garbage in equals garbage out. A little EQ is great for helping make a good track sound better, but no amount of EQ will make a bad track sound good. The best mix starts with the best recording, so try to capture the best sound you can to begin with

Your ears are the bottom line when it comes to applying EQ. While we can talk about a few general principles, every instrument has its own unique characteristics and timbre, and will react differently to boosting or cutting specific frequencies. So take these and all suggestions with a grain of salt; use them as a starting point but make your decisions based on what sounds good.

Take it Away Now

When it comes to EQ, less truly is more, and it’s better to take than to give. Many less experienced users have a tendency to make an instrument stand out by boosting frequencies, but the cumulative results can be dangerous. Adding just 2dB of gain to two different instruments means that when they excite the same frequencies (and they will, believe it), you’ve got a very audible 4dB of gain. Add too much EQ and your mix can easily turn to mud. It’s often a better idea to try attenuating those same frequencies in other instruments instead.

Another good reason to minimize your use of additive EQ: while cutting frequencies is a passive process, boosting frequencies makes your EQ function as a preamp within the signal flow. Adding any preamp means adding noise and distortion, and the preamps in most EQ circuitry are less than optimal.

All those arguments aside, sometimes it’s simply more effective to boost one element of the mix, rather than rolling off dozens of others. Once again, the operative word here is moderation – a little boost of 1 or 2dB goes a long way.

EQing Drums – If it Doesn’t Fit, You Must EQ It

If your mix includes drums, it’s a fair bet you’ll spend much of your mixdown time EQing them. Because drums cover such a wide tonal range, there’s plenty of other stuff in the mix that can compete with those frequencies. Kick and snare in particular tend to loom large in the song’s sonic landscape, and when it comes to helping them play nicely with others, EQ is your friend. If you’re working with a live drum kit, keep in mind that every drum track also contains leakage from other mics — boosting a frequency on one track can also bring out the off-axis sounds of adjacent mics, potentially creating more problems than it solves.

Typically, the kick drum and bass guitar both live in the 80Hz to 120Hz frequency range, and a bit of EQ can help bring definition to the bottom end. It’s a good idea to pick one as the rounder, bottom-y sound and make the other a bit more bright and punchy; which is which will be dictated by the song.

For a dull sounding kick drum, adding a slight boost anywhere around 80Hz to 120HZ will produce a more robust and rounded “thud.” Adding a tiny bit of 500Hz can bring out the “click” of the beater hitting the drum head, and can be helpful in preventing the kick from disappearing once your track hits the listener’s earbuds in the inevitable low-fi MP3 version.

Snares come in such a wide range of sizes and materials, it’s a bit tough to generalize about frequencies. But the sound of the snare wires rattling lives in the 5kHz to 10kHz range, and a tiny bit of gain there is great for brightening up a dull snare. If you’re plagued with a boxy sounding snare, try rolling off a bit of 300 through 800Hz.

With toms, a common mistake is boosting low end to make them stand out. Adding a couple of dB at 100Hz will increase their power, but at the expense of muddying the mix. A better strategy for perking up those tom fills is to leave the bottom end alone and add a tiny bit of 5kHz to bring out the attack. And as with the snare, play around with rolling off that same 300 through 800Hz range to eliminate boxines

Almost every tom has a resonant ring, and some can be problematic. Of course, the basics apply: tune the toms first and foremost to reduce or eliminate ringing. Whatever problem resonance remains can be addressed using a surgical approach with a multiband EQ. Select a narrow Q and boost the gain as you sweep the midrange band. When you locate the offending frequency, apply a few dB worth of cut to make it go away.

Overhead mics can be a mixed blessing. Their position and relative distance from the kit makes them great for adding air and ambience, but loud cymbals can overpower the mix. Try adding a bit of 10kHz to brighten the track, and then backing off the overall level to get the air without too much metal. 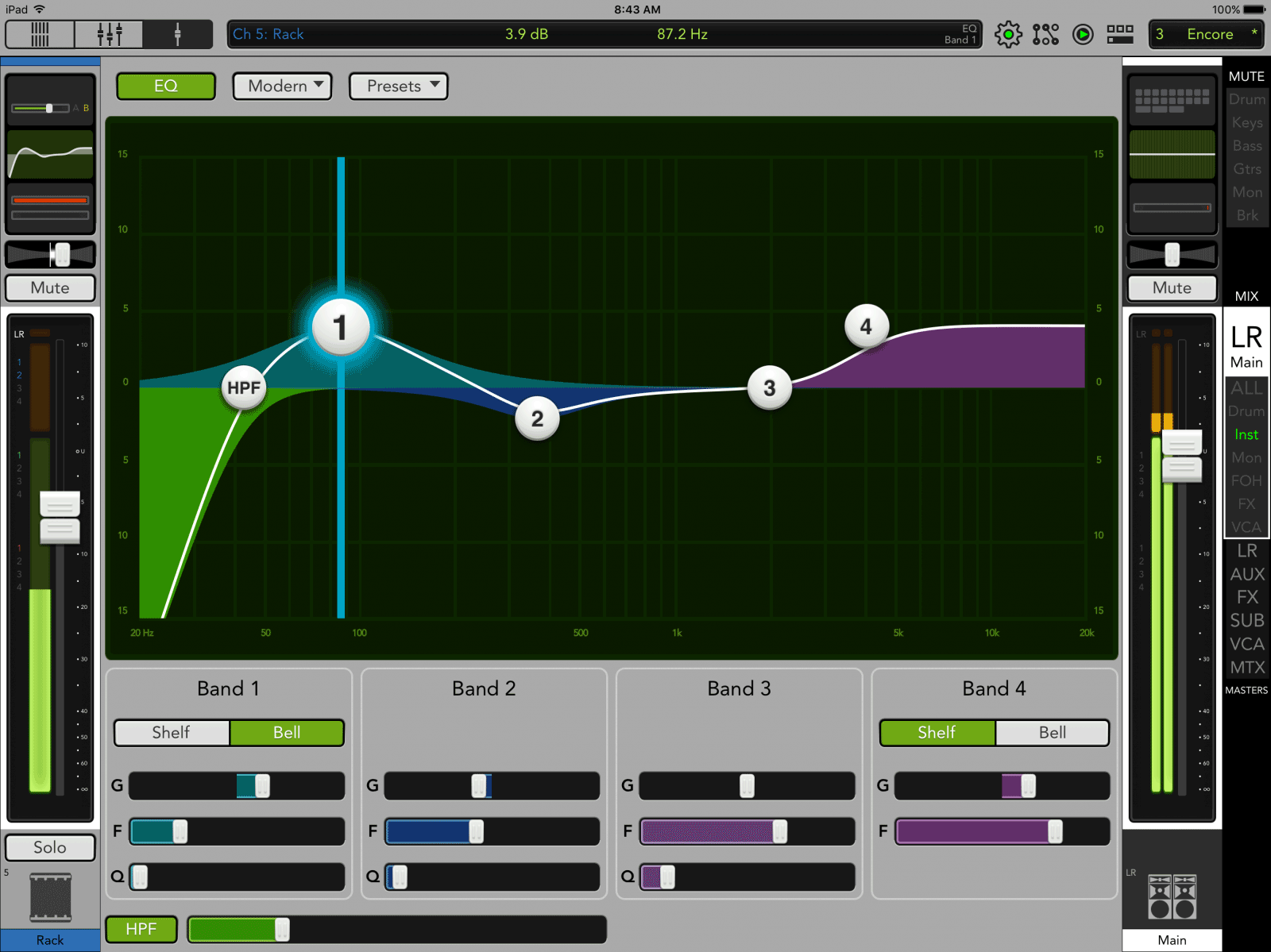 The Bottom Line on Bass

While nothing comes close to the sound of an SVT cabinet recorded live, in today’s project studio world, it’s not always possible to record live at the volume you’d like. If you’re working with a bass track that was recorded direct, chances are it’s a bit flat and nondescript compared with a miked bass amp. The good news is, that flatness will ultimately make EQing the DI track far easier, since there’s less coloration to begin with.

Like the kick drum, boosting the 80-120Hz range on an electric bass will add roundness and bottom end. To add presence and attack, go for a slightly higher range than with the kick, around 1kHz. Don’t add too much or you’ll bring out the finger noise as well.

Guitars are among the most versatile instruments; that same versatility can make them a real challenge. With electric guitars, if you’re fortunate to have a player who knows their amp and their sound, your best bet is to change as little as possible.

If you’ve got two rhythm guitar parts going, a bit of panning and EQ can help distinguish one from the other. Try a slight boost at around 100Hz on one to bring up the lower mids (with perhaps a corresponding cut on the other guitar). Experiment with higher frequencies on the second part – boosting different frequencies between about 750Hz and 10kHz will each bring out a different type of sparkle. Scooping out a bit of 250 to 500Hz can help eliminate some harshness and woofiness.

Acoustic guitar is a very different animal. Each has its own unique tone and timbre, and much will depend on the room, the microphone selection and placement, and of course, the player. A mic too close to the sound hole will deliver a boomy sound; a slight cut at 100Hz can help. Close miking can also pick up some boxiness from the wood’s resonance, especially around the midrange. Try dropping a bit of the 300 to 400Hz range. And of course, bring out the shimmer and strumming sound by boosting the upper ranges, from 750Hz up to around 10kHz (watching out again for finger noise).

Listen Before You Look

One last point: take this and all advice as nothing more than suggestions. There are no hard and fast rules except one: use your ears. It’s all about how it sounds, so close your eyes and listen. Adjust your EQ, then listen again. Listen to your changes in the context of the whole mix, not just soloed.

Don’t stare at meters, don’t depend on some DAW designer’s presets, and don’t boost a certain frequency on an instrument because you read that someone else does it. Every instrument is different, every room sounds different, and every artist and song is unique. Your approach should be too.